Addressing the Urgent Need of our Time

Addressing the Urgent Need of our Time

Just as we begin to emerge from a two-year global pandemic, we find the world threatened by an escalating war – leaving us with a sense of helplessness. But there is something available to dispel the turmoil among nations and give us real hope.

We want to once again share with the world the solution that everyone is desperately seeking – not only a solution to this conflict but a solution that can prevent all future global, national and societal conflicts.

This may sound like a utopian dream or even just wishful thinking. But it is actually a scientifically established fact. This proven approach to world peace has been named The Maharishi Effect in acknowledgement of its founder, Maharishi Mahesh Yogi. The Maharishi Effect is, in essence, the society-wide influence of harmony and positivity generated by the group practice of Transcendental Meditation combined with its advanced meditation technique, the TM-Sidhi program.

I would like to explain the hypothesis of the Maharishi Effect and then share with you the research that makes this hypothesis far more than an abstract, idealistic theory.

In 1960, Maharishi proposed that a large group of TM meditators, experiencing and enlivening the most fundamental level of awareness within the silent depth of their own minds, would create a measurable influence of orderliness, harmony, and coherence that would spread throughout society. Maharishi described this effect as the Field Effect of Consciousness: the widespread effects of group meditation. 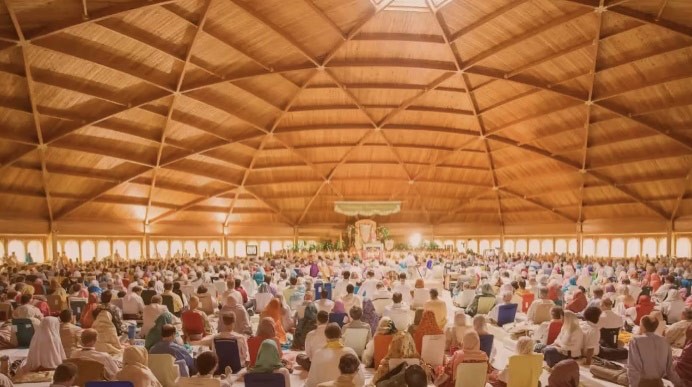 At the same time that Maharishi introduced the Field Effect of Consciousness, there were breakthroughs in quantum physics that were providing the scientific validation of Maharishi’s hypotheses through various intriguing physical mechanisms that could explain the Maharishi Effect. Quantum physics was on the brink of a Unified Field theory that would eventually verify that both physical creation and human awareness, at their source, are one and the same Unified Field of Pure Intelligence, Pure Consciousness. The practical benefit of this fundamental insight is that human awareness has access to the infinite power and creativity of the intelligence that runs the universe.

We can appreciate the principles involved in the Maharishi Effect with the simple analogy of dropping a pebble into a pond, causing ripples to spread out at a far distance in all directions. In the same way, when human awareness settles down and experiences its underlying field of universal intelligence, it enlivens that field
– which in turn radiates an evolutionary and life-supporting influence throughout all of creation.

The first scientific experiment testing the effect of the group practice of the TM and TM-Sidhi program on reducing warfare and war deaths took place in Jerusalem, in 1983, with the intention of having an influence in quelling the civil war raging in Lebanon at that time. 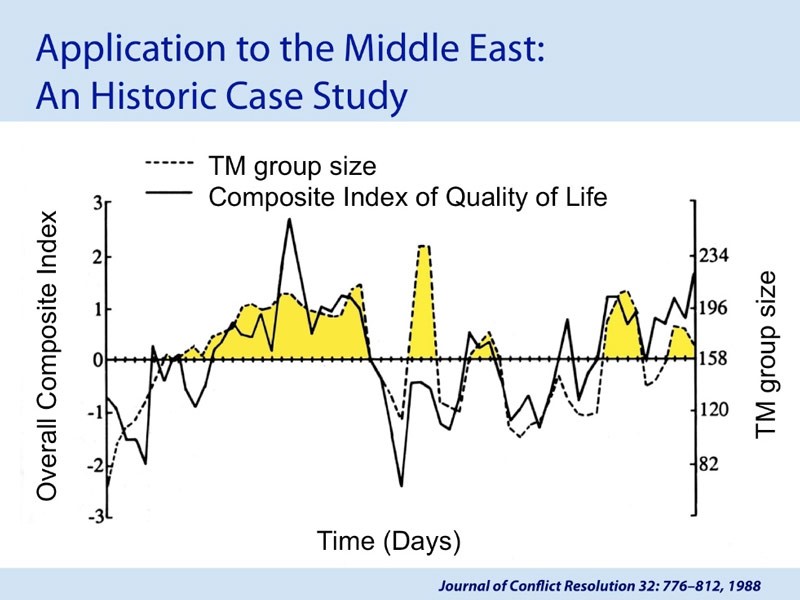 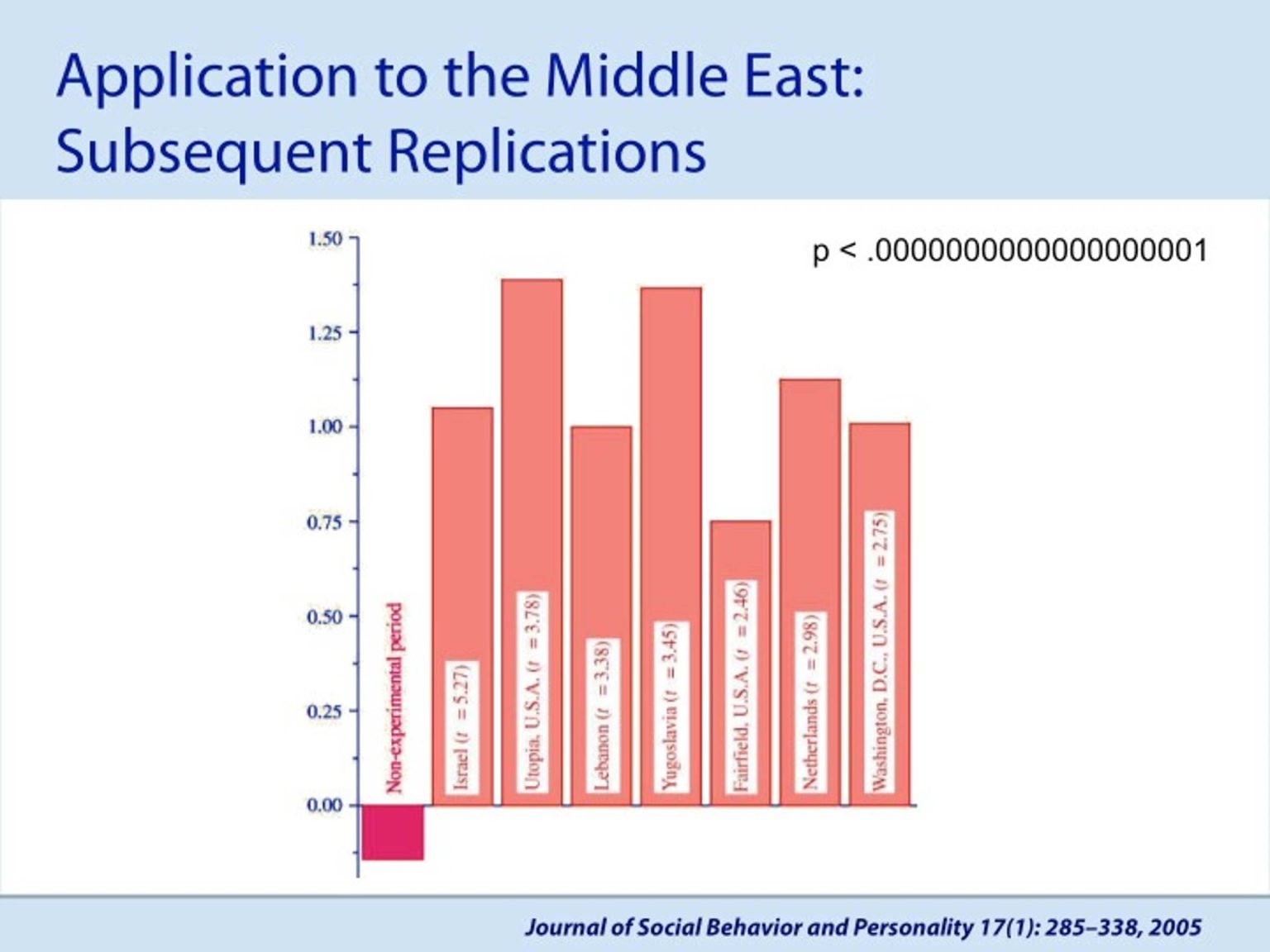 When a large group of TM-Sidhi meditators gathered together to practice their meditation, there was a remarkable correlation: on the days when the number of those practising their meditation together was high, the progress toward peace in the Middle East was high – violence dropped and stayed low for as long as the group continued to gather for group meditation. The final data revealed that whenever the group of TM–Sidhi practitioners assembled, there was an average of a 76% reduction in war deaths.

Once the study was completed, it was submitted for publication to the most prestigious, relevant journal: The Journal of Conflict Resolution. This journal is affiliated with Yale University.

Because the basic premise was so novel (almost unbelievable), the study was subjected to an exceptionally long and arduous process of peer-review before it was published. It was held to a standard of scientific rigour far beyond what is required by any journal, and yet the study on the Maharishi Effect was unassailable. And so, the study was finally published.

But the journal’s editors felt compelled to include an editorial in which they stated that because the results were rather shocking – the fact that the behaviour of a few hundred people could influence the behaviour of more than a million people, turning off the violence of warlike turning off a light switch – they would need to see the study replicated in order to be able to embrace the hypothesis. Because the implications of the study were so enormous, Yale University’s Journal of Conflict Resolution called on other scientific groups to repeat the study.  In response to that request, there were seven repetitions of the experiment, over a period of almost two and a half years, involving large groups of up to 8,000 practitioners of TM and its advanced program.

With a 71% reduction in war deaths averaged over all these trials, the likelihood that this was caused by something other than the Maharishi Effect came out to be less than 1 in 10 million trillion – which is an order of magnitude beyond anything that has ever been tested in the world of the social science – anywhere, ever. This is, without a doubt, and by far, the most thoroughly established experiment in the history of social sciences, proving that we can turn off war by turning off, by neutralizing, the cause of war. And the cause of war is a mountain of tensions and stress, generations of accumulated social, religious and ethnic tensions. The Maharishi Effect has proven that this kind of stress can be neutralized.

The extraordinary good news is that this research verifies that with the correct number of people practising the TM and TM-Sidhi program in a group, we can create peace, reduce crime and improve quality of life, with the same confidence that we switch on a light to light up a room.

We have a powerful message to share with those who have the financial wherewithal to create world peace today! We have a proven, cost-effective, peaceful technology that not only prevents war but simultaneously increases all aspects of quality of life for everyone.

Yes, of course, it is going to be challenging to find a way to inspire the world to embrace such a novel approach to peace. Here is a story that makes this point: In the late 1800s, there was a debate whether the military should continue investing in homing pigeons to send messages or if the military should invest in the newly discovered radio technology. At that time, they decided to continue funding homing pigeons because most people couldn’t imagine that messages could really be sent invisibly through the air.

This is the same kind of challenge we face today. The world is on the verge of a paradigm shift, much in the same way it was back in the late 1800s, before the public understood the science and applied technologies of the electromagnetic field. Today it is the knowledge of the quantum field of physics and the knowledge of the vast potential of human consciousness that are offering the world the most dramatic paradigm shift that civilization has ever known. There is a wonderful quote by the anthropologist Margaret Mead:

“Never doubt that a small group of thoughtful,
committed citizens can change the world. Indeed
it is the only thing that ever has.”

A group of women who understand the transforming effects of the simple procedure of transcending the thinking mind and thereby opening individual awareness to infinite universal awareness can be that small group. We can promote this astounding news of a solution to the crisis we face today. We can inform those who have the resources and the creativity and the vision to implement this proven solution to what ails us as a nation and as a family of nations.

This is the very purpose of creating our communities of enlightened women who own the whole world as our family. As a focused group of women who want the best for everyone and are armed with insights into the most profound principles of life, together, we can absolutely transform the world.

With heartfelt acknowledgement of our shared desire for a kinder, gentler world,

Candace Badgett,
International Director of TM-Women
For Canada, the United States, and Australia