The Fulfillment of Maslow’s
Theory of Self-Actualization

The Fulfillment of Maslow’s Theory of Self-Actualization

The 1960s saw the emergence of a new field of psychology, the Human Potential movement, inspired in large part by the works of Abraham Maslow. Unlike most psychologists, Maslow focused on the attributes of the healthiest people in society, instead of the abnormal or ill. Maslow popularized the notion of self-actualization which he defined as: “the process of becoming everything you are capable of becoming.” He also identified a hierarchy of needs, which he represented as a pyramid. At the bottom is our most basic need to survive; at the top is the state of self-actualization 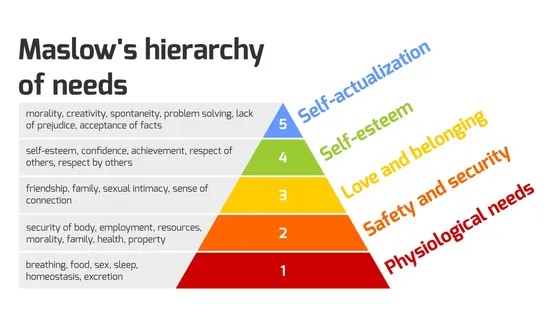 Our most basic physiological needs are food, water, shelter, and so on. When those needs are taken care of, we are then able to focus on the satisfaction of higher needs, such as our need for safety, relationships, and respect for ourselves and others. Finally, when all prior needs have been met, we arrive at the top of the pyramid, where we become the best version of ourselves, meeting our highest needs of self- actualization and transcendence.

What is our full potential?

Most of us have grown up with the notion that developing our full potential means excelling in our careers or endeavours, such as becoming an elite athlete, a world-class musician, a top- notch surgeon, a multi-millionaire, and so on. However, does succeeding in our careers automatically mean we become self-actualized? Maslow would say no. He identified 12 characteristics of a self-actualized person and none of them is a measure of how well we succeed in our careers. Instead, these characteristics identify how we see ourselves and others.

According to Maslow, self-actualized people:

Maslow believed we all hold different values, desires, and capabilities. As a result, self- actualization will manifest itself differently in different people. One person may self-actualize through artistic expression, while another will do so by becoming a parent, and yet another by inventing new technologies. Maslow believed that the more emotionally healthy we are, the greater the likelihood of our becoming self-actualized, but he estimated only about 1% of the population could achieve this highest human aspiration.

Transcendental Meditation and Self Actualization

Maharishi Mahesh Yogi, Founder of the Transcendental Meditation technique, expressed the idea that developing one’s full potential was the birthright of everyone and was within everyone’s grasp, given the right technique.

Maharishi’s introduction of the Transcendental Meditation technique gave the world the tool to systematically reach a state of self-actualization. TM allows us to tap into the deepest level of the mind and experience a profound level of inner calm and stillness. Along with the inner silence, one experiences increased energy, focus, and emotional strength. The experience of TM, when practised twice daily, can completely transform our lives, allowing us to reach self- actualization, the pinnacle of human development.

But does TM work?

Numerous published studies (*see references below) have demonstrated that practitioners of TM show significant increases in self-actualization or qualities associated with self actualization, such as:

Maharishi has said that our inner self is “the basis of all life and the field of all possibilities. Its nature is to expand and unfold its full potential. The impulse to evolve is thus inherent in the very nature of life.”

In other words, every human by their very nature will eventually be the best version of themselves. Now we have a technique that makes that path faster and easier.

The Value of Silence