Stress, Meditation and Hans Selye:
An Ancient Solution to a Modern Problem

Flip through any popular health magazine or scan the internet for health topics, and you will find countless posts and articles on stress and its effect on our health. Given how much information is on the subject, most people are surprised to learn that the medical concept of stress is relatively new.

Originally, stress was a physics concept. It describes the interaction between a force and the resistance to counter that force. However, it wasn’t until the 1930s that pioneering doctor and researcher Hans Selye first incorporated this term into the medical lexicon. His medical definition of stress is “a nonspecific response of the body to any demand”.

Dr Selye distinguished between eustress and distress. “Eustress” is a word he used to describe stress that is positive, motivating, and enhances functioning, while “distress” refers to detrimental and overwhelming stress that impairs functioning. Dr Selye emphasised that stress can be a positive thing in the sense that it can propel us to grow and move us forward. But overwhelming stress triggers a negative physiological response.

While at McGill University, Dr Selye developed and researched general adaptation syndrome, also known as stress syndrome. Stress syndrome is the process under which the body confronts negative demands put on it. This stress syndrome happens in three stages: 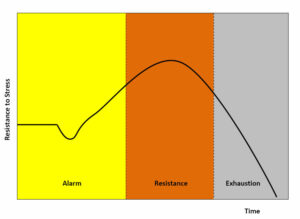 1. Alarm reaction, in which the body prepares itself for “fight or flight”
2. Adaptation, where the body builds up resistance to the stress
3. Exhaustion, a sort of “ageing “due to constant wear and tear from resisting stress.

At first, Dr Selye’s breakthrough research on physiological stress met with resistance. Medical experts, for example, baulked at his notion that the stress syndrome had a causal relationship to major illnesses such as heart disease and cancer—a phenomenon that is now widely recognized. But his research was compelling and helped to forge an entirely new medical field: psychosomatic disease is illness that is caused or aggravated by stress.

Maharishi Mahesh Yogi introduced the Transcendental Meditation technique to the world in the 1950s. TM is an ancient and authentic meditation technique that originates from the Vedic Tradition of India. The understanding that meditation can be a powerful tool for overcoming stress and advancing growth and fulfilment had been lost. Meditation was thought impractical and only for the hermit who aspired to nothing in the material world. Maharishi’s message was that meditation that allows transcending is valuable and practical, and essential for anyone who wants more out of life.

In the early 1970s, Dr Selye met with Maharishi during an international scientific symposium. Dr Selye has said of his meeting with Maharishi, “It was my good fortune to have spent almost an entire day with Maharishi Mahesh Yogi at one of his international symposia. Ever since then, I have felt it would be extremely fruitful to explore in detail the obvious physiological and psychological influence exerted by Transcendental Meditation on stress in the body.”

Again, Dr Selye was looking to the future. Since 1970 hundreds of peer-reviewed research studies have explored in detail “the obvious physiological and psychological influence exerted by Transcendental Meditation on stress in the body.” The usefulness of the TM technique in reducing stress and promoting growth and well being in a variety of populations is now well documented. Some of the most significant studies show that TM:

With an ever-increasing awareness of the effect of stress on our physical and mental well-being, the introduction of the Transcendental Meditation technique as an important tool to combat overwhelming stress and promote well-being is timely and welcome.